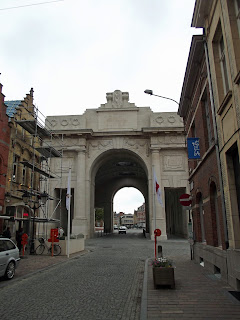 Arthur John Reeves is a cousin on the very edge of my mother’s side of the family. My 5x great grandfather, William Jenner was Arthur’s great grandfather.
Arthur and his sister Ellen were the only children of Alfred Reeves and Mary Etherington who were married in 1887 in Sussex.

Ellen was born in 1889 in Cowfield and Arthur just a year later at the beginning of 1890 in Warnham.
When the 1891 census was taken, the family were living at Warnham Mill which is now on the outskirts of Horsham. Alfred was an agricultural labourer. Four year later, when Arthur was five, his mother died followed three years later by his father. In 1901, eleven year old Arthur was boarding with George and Mary Luff and their family at Oakhurst Farm at Kirdford. He does not appear to be related to the Luffs. Ellen was with her uncle Eli Etherington and family at Goose Farm in Warnham. Arthur was still with the Luffs in 1911 and working as a farm labourer.

Arthur joined the Royal Sussex Regiment in September 1914 as part of Kitchener’s Army. Lord Kitchener had appealed to the young men of the country to join up and fight and by mid-September, 478,893 had responded. The 9th Service Battalion was formed at Chichester and this is where Arthur joined. They came under the command of the 73rd Brigade in the 24th Division. The early days of the 24th Division were spent in improvised billets in the Sussex area. It is known that they were at Portslade in December and they moved to Shoreham in April 1915. In June they went to Aldershot for final training. Lord Kitchener inspected the division at Chobham on the 19 August and King George V inspected the next day.

This from the war diary of the 9th Battalion Royal Sussex regiment; ‘During the week following the 21st August 1915 the regiment was ordered to proceed over-seas. On Aug 31st the regiment left Woking for Southampton in three parties an embarked on the S.S. “La Marguerite” disembarking at Le Havre on the morning of the 1st September 1915 and marching to Camp No5 Havre.’
They spent the following three weeks training with weapons and preparing for combat, including testing their smoke helmets which were to protect them from gas attacks. They also practised boarding and alighting from buses so that this could be done with the utmost efficiency. It was noted that ‘the average time for boarding was 35 seconds.’

The battalion went into action in the front line on September 25th and in early October were based at Proven near Ypres. They spent the final week of October in front line trenches where weather conditions were appalling with continual rain. The trenches became waterlogged and badly constructed so that the sides collapsed without warning. There was little shelter and the enemy were shelling on and off. They continued to rotate four days in the trenches and four days in camp throughout November while December was mostly spent at Houlle in training.
At the beginning of January the battalion moved by train to St Quintin and then to Poperinghe. The end of the month saw them back in the trenches at Ploegsteert Wood. On February 2nd, the diary records that the men had the use of the baths at Poperinghe and they received tins of sausages and peppermints from the Sussex Soldiers Cigarettes and Comfort’s Fund back at home. The battalion were in the front line trenches at Ypres from February 12th -15th, the 13th being a day in which many casualties occurred including a platoon who were buried alive following a mine attack. Three days behind the lines followed then back in the trenches on the 18th.

The 21st was reported to be a quiet day with fine weather, so it seems unlikely that Arthur Reeves died from an attack on that day. As he has no grave and is commemorated on the Menin Gate, he was presumably one of the 90,000 never found or identified and he did not die in hospital. He was just one of the “other ranks” just listed by numbers in the reports. Whatever happened February 21st is the day recorded for his death.

His war gratuity of £8 paid to Ellen on 3 Oct 1919. What happened to Ellen is difficult to trace as there are many ladies with the same name, so whether she married and had a family is unknown.

Acknowledgements
West Sussex Record Office for the extracts from the 9th Bttn War Diary
Commonwealth War Graves Commission
www.longlongtrail.co.uk/ for the day to day commentary.
Bob Price for photos of The Menin Gate and the Memorial Book


Posted by coastwallker at 01:48 No comments: