Edmund David Cook is my first cousin twice removed. His father Joseph was the younger brother of my great grandfather John.

When the 1901 census was taken, the family were living at Railway Terrace, Tredegar Junction, Pontllanfraith. Joseph was a coal miner as were his father and brothers. A week or two after the census night, the family welcomed Elvert Leslie (always known as Leslie) then a baby girl Brenda Augusta just over a year later. She was followed by Cyril Kenneth in 1905, Rachel Muriel in 1906, Jack Byron in 1907 and finally Desmond Ellion at the end of 1911.

In 1911, the family were living at 6 Station Road Pontllanfraith, which may well have been the same house as ten years previously, as the road was renamed. Also living with Joseph and Lydia in 1911 were Lydia’s sister Rachel and brother David. In 1912, Joseph and Rachel had a son Joseph Augustus.

Edmund’s memorial gives his battalion as the 2nd which means he was a regular soldier in the South Wales Borderers before World War 1. I have no record of the date he joined but if he was already serving in 1914, he would have been on the other side of the world when war was declared. In August 1914, the 2nd battalion were stationed at Tientsin in northern China and at the end of September were sent to Shandong to fight with the Japanese against German positions at Tsingtao. On December 4th they left China to return to England. In January they went to Rugby and joined the 87th Brigade of the 29th Division leaving for Gallipoli via Egypt in April. Assuming Edmund was with them, he would have been part of the battles in Gallipoli and evacuated with everyone else in January 1916. They went to Egypt and from there orders were received in February to embark for France where the division arrived in Marseilles on March 15th.


On April 3rd, they went into the trenches in the front line. The trench which they were allocated, known as The Mary Redan, had been badly damaged by previous bombardment. The following days were recorded in detail in the war diary;


“The 4th and 5th April were without incident but on 6th April at about 9.0 pm, a very heavy bombardment was opened by the enemy. This bombardment was concentrated on the right half of ‘C’ Company commanded by Capt F.S. Blake, on communication trenches leading up to it and on the portion of trench further north from which the front of ‘C’ Company’s trench could be enfilladed. The bombardment lasted until 10.30 pm when it ceased as suddenly as it had begun. It is not an exaggeration to say that the bursting of shells was so frequent that the communication trench from Bn H.Q towards the front line was lit up continuously. The trench held by the right half of ‘C’ Company was demolished…” He goes on to say that the force of bombs on either side of the trench closed it completely and men were crushed between the walls. In that hour and a half, 5 officers and 78 other ranks were killed. One of these was Edmund Cook. He, with his fellow soldiers, had only been in the front line for three days and they are buried together at Mesnil Ridge Cemetery. In the row containing Edmund’s grave are six others from the same regiment with nine more in the row behind, all killed on the same day. In all twenty seven men from the South Wales Borderers are buried here.


Back home, Edmund’s family grew with the birth of another son to his father Joseph and aunt Rachel in 1919. He was named Edmund David. Lydia died in 1938 and Joseph married Rachel in 1942. This meant that he had children by his wife and his sister-in-law and his eldest and youngest children were both called Edmund David. 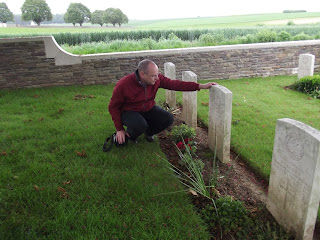 Acknowledgements
The Commonwealth War Graves Commission
www.longlongtrail.co.uk for the day to day commentary.
The Regimental Museum of The Royal Welsh at Brecon. www.royalwelsh.org.uk
My brother, Bob Price (pictured above) for photos of Edmund's Grave taken on his visit to France and Belgium in 2014.